We regret we are only accepting school and college orders currently

Football, Society and the Law 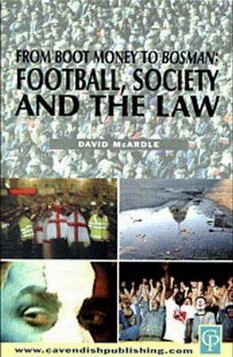 This text provides a new dimension to the exciting and rapidly expanding field of sport and the law. David McArdle contemplates laws influence over the development of football between the founding of the English Football League in 1888 and the European Court of Justices seminal ruling in the Bosman case over a century later. From Boot Money to Bosman provides insights into how the law on violence and consent impacts upon acts of on-field violence,the courts role in securing players a greater degree of contractual freedom and the football governing bodies responses to player power. It also looks at the games, and the legislatures, attempts to prevent hooliganism and racism and considers the impact of the move towards all-seater stadia in the wake of the Hillsborough disaster. The book provides information on how race and sex discrimination law impact upon footballs employment practices, explains why the sports governing bodies are immune to public law remedies such as judicial review (but are possibly not immune the provisions of the Human Rights Act 1998) and exhorts footballs governing bodies to take the lead in participant protection initiatives. Lucid and thought-provoking, this book will be required reading for sports studies students and particularly those who are concerned with football and the law. It will also appeal to people working within the football industry and others who wish to understand how the law has influenced, and will continue to influence, the development of football.