We are pleased to say we are open and operating as normal.
Please phone us on 020 8644 7788 or contact us to enquire about prices and availability and for quotes and orders.
Please be aware that many publishers are still operating on reduced staff and so turnaround for some titles may take a day or two more than normal.
We look forward to speaking to you. 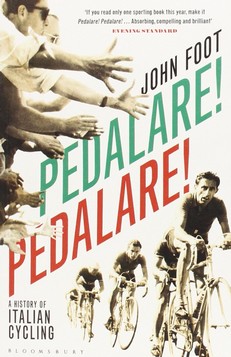 Cycling was a sport so important in Italy that it marked a generation, sparked fears of civil war, changed the way Italian was spoken, led to legal reform and even prompted the Pope himself to praise a cyclist, by name, from his balcony in St Peter's in Rome. It was a sport so popular that it created the geography of Italy in the minds of her citizens, and some have said that it was cycling, not political change, that united Italy. Pedalare! Pedalare! is the first complete history of Italian cycling to be published in English. The book moves chronologically from the first Giro d'Italia (Italy's equivalent of the Tour de France) in 1909 to the present day. The tragedies and triumphs of great riders such as Fausto Coppi and Gino Bartali appear alongside stories of the support riders, snow-bound mountains and the first and only woman to ride the whole Giro. Cycling's relationship with Italian history, politics and culture is always up front, with reference to fascism, the cold war and the effect of two world wars. The sport is explored alongside changes in Italian society as a whole, from the poor peasants who took up cycling in the early, pioneering period, to the slick, professional sport of today. Scandals and controversy appear throughout the book as constant features of the connection between fans, journalists and cycling. Concluding with an examination of doping, which has helped to destroy what was at one time the most popular sport of all, Pedalare, Pedalare is an engrossing history of a national passion.